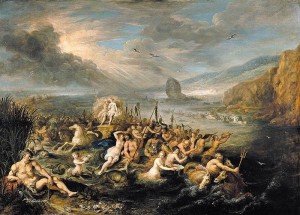 ASPECTS BETWEEN SUN AND NEPTUNE

Welcome! The effect of the aspect between Sun and Neptune in the natal chart, in progression or transit Neptune in aspect with Sun relates your life and lifestyle to uncontrolable and invisible issues like the media, fantasy, ideals and dreams or gossip, nightmares, deceit, desillusions and all that is fake. Even you might not be the real you…

It is easy to believe and it is easy to pretend with a Sun-Neptune aspect in your chart. You could be very naïve or a con man, but in a way your way of living has something ‘double’. Some of you may have a vivid dream life that can be more intense than the dull daily life you are living. Some actually have a double identity (as a spy, or having two families). And others just have a vivid imagination and create fantasies for a living.

Actors with this aspect are often confused with the role that they have. And when there is gossip, it is not easy for someone with a Sun-Neptune aspect to show the truth.

Read my blog Astropost about missing people and the suspects in those cases: Sun-Neptune was there! People find it easy sometimes to believe the lies about you, positive or negative ones. Perhaps that is because you are not completely clear about who you are. President Barack Obama has Neptune in the 9th house of conviction, square natal Sun. There is an ungoing media hype about his conviction or religion. With Neptune it is very important to be clear and ope. That is why it is better to have nothing to hide when Neptune comes your way.

One of the effects of a Sun-Neptune aspect is being ‘praised into heaven’. Or if you are in heaven, being ‘suspected of being the devil’. There is often a big difference between which you are (Sun) and what people think you are (Neptune). Especially when you are in the newspapers! See what happens to Barack Obama (Sun square Neptune) and Susan Boyle (Sun inconjunct Neptune).

I knew someone with Sun conjunct the oriental Neptune who used to say: “Am I who I think that I am, or am I who other’s think what I am?” She had an oriental Neptune conjunct the Sun. Your image can be different from who you really are because embody the dreams and nightmares of others, you are their living fantasy. Of course this is not happening to everybody with a Sun-Neptune aspect. It only occurs when this aspect is tight and/or related to the Midheaven or Ascendant, the cross points in the chart that correspond with the individual identity.

People who see the readings of their charts sometimes wonder: “Is that me?” and it is easier to believe the positive characteristics, is not it?:) When you have Sun-Neptune and somebody tells you to ACT like a president, you say” Yes I can”, because you can ACT like a president if it is needed. Sun-Neptune has multiple personalities. Often with Sun-Neptune conflicts you see the ‘double life’, the actor who has problems to keep the role in the play apart from personal life.

Actors benefit from the Sun-Neptune relationship. They can imagine how another person thinks, feels or acts and they can actually imitate it. Imitation is what we learn when we are little children. We do as our parents do or tell us to do. That is ‘reflecting, mirroring’ and symbolized by the Moon. The Neptunic imitation is mirroring a fantasy, an idea, something that is not real.
Josef Fritzl has a Sun-Neptune biquintile aspect. The biquintile adds ‘being creative’ to the concept of the vivid imagination and ‘living your dream’. What he imagined was realized in a creative way. People did not think of him as a person with a double life, but he had it. It was a perfect act. More about the positions on his day of birth…

There is another side of the Sun-Neptune aspect and that is that it debiliates health. The same open-ness to others personalities and concepts opens the health system for intruders like, viruses and the bad effects of alcohol, tobacco, drugs and medications. Whenever Saturn transits the combination or makes an aspect in progress, there is a risk of becoming ill, in particular when Sun, Neptune or Saturn are related to the Ascendant.

Think of Elvis Presley, the great pretender. He had Sun in Capricorn trine the elevated Neptune and Saturn quintile Ascendant. When he died, his progressed Sun had recently changed sign (to Pisces, ruled by Neptune) and was about to join the progressed Saturn.

Or think of Lisa Minelli, who recently gave up drinking and had a come back. She has Sun quindecile (165 degree aspect) Neptune.

President-to-be Obama is a smoker and he has Sun square Neptune. More about the smoker in the chart of Obama in another post… http://astropost.blogspot.com/2008/12/smoker-in-obamas-chart.html

Sometimes or from time to time people with this aspect dream about being another person or being somewhere else. Speculations about a glorious future after winning THE prize in the lottery go together with plans for building houses and in the meantime forgetting that it is time to eat. More serious is it, when a person starts believing that he CAN be the ruler of the world or SHOULD be it. But that is more the pathological Sun-Neptune…

The bright side of Sun-Neptune is that it is easy to love pets with any harmonious aspect, because a person with Sun-Neptune is empathic, not only with human beings, but also with animals. See Astropost about that side of the aspect between Sun and Neptune.

The challenge for a Sun-Neptune person is spiritual leadership. With that I mean founding a religion or conviction, or being important or in charge of the spiritual group, a representative, like the Dalai Lama is or the Pope. I don’t mean political leaders. Having an aspect between Sun and Neptune is not necessary to be a spiritual leader, but it helps when a dream, illusion, vision or ideal is related to your way of living. Aspects between Sun and Neptune can be used positive or negative, but will always have the effect that the amorphous world of movies, art, dreams, hallucinations, fantasy, spirits, empathy and the spiritual is closer than in the lives of those who don’t have this aspect.

L. Ron Hubbard (founder of Scientology) has Sun in Pisces trine Neptune and Neptune square Venus and Midheaven, with Moon quindecile Venus. It is a pattern for art and creativity. Lafayette Ron Hubbard wrote various poems and science fiction books. He had the Sun square Ascendant, Pluto on the Descendant, Venus opposition Midheaven and Jupiter sesquisquare Aries Point. There is also a prominent Uranus, rising before his Sun. The prominent planets in his chart show us that he knows how to draw attention (perform or lead) and that he had a lot of support (Venus with Jupiter and Pluto) though he was controversial.

Another spiritual leader is the Dalai Lama. In his chart Neptune is the most elevated planet, square the prominent Sun on the Descendant and square Ascendant.

Other spiritual leaders may have variations on the theme, like Joseph Smith (founder of the Mormon Church) who has Jupiter rising before the Sun and Neptune ‘calling'(not making major aspects in sign) but no aspect between Sun and Neptune. See the story about Jupiter and Neptune combinations, like in the charts of monks and popes (/Studies).

The progressed Sun-Neptune aspect is quite confusing and may indicate a period of romance, psychic experiences or highlighted beliefs. Your illusions will be in the spotlights and so are your secrets. If you have Sun-Neptune in your natal chart, this moment in time might shed a light over the other side of you, the private life or the secret life (an affair, your nick name).

When the progressed Sun is in a hard aspect with Neptune, you may experience a period of isolation (and inspiration, if you are an artist) or you may ‘get lost’, ‘disappear’ (in the eyes of the public) or experience gossip and slaunder. Most of the time the person involved was mistaken, hiding something vital or debilitated and and easy victim.

The more harmonious aspects of Sun and Neptune make it easy for you to dream on or relax. Don’t expect this to be a fortunate aspect, always. Sometimes this aspect releases you from your identity as an individual and turns you into ‘one of the guys’, like in prison or you may have enough time available for fantasies and dreaming because you no longer have a job. Progressed Sun trine or sextile Neptune only makes it easy to hide away from reality, society or life as it it. When you are an author or an actor, this aspect helps you to empathize with the characters in your book or play. And sometimes with this aspect romance really comes into your life and if you are lucky, it won’t go away again.

A hard progressed aspect tells you that your dreams are not easily to be realized. A soft progressed aspect makes your dreams come true, but you have to be careful what you dream about. Because somewhere in the closet might be a hidden nightmare. That is in particular true when the aspect is an inconjunction. That aspect often refers to health problems. Health problems take you out of society and into isolation and they reveal a weakness.

Life is not like in the movies. That is what you discover when Neptune and Sun are making a hard contact. When Neptune transits your Sun, your identity and lifestyle will be ‘misty’. What did you do wrong to end up like this? You may ask yourself these sort of questions in this period. When you have Neptune in contact with your natal Sun, this might be the moment when something wrong (poison, medications, a drug) comes into your life and when you realize that life is not romance, while you wished it should be like in the movies.

Winston Churchill’s appointment to Chancellor of the Exchequer and his 1924 Budget decision lead to mass unemployment and strikes. He had progressed Sun square Neptune at the time. He started isolating himself.
Two more examples of transits of Neptune confusing people:

1. Holocaust denier David Irving at the time of his latest trial and

2. Pilot Cory Lidl at the time of the plane crash.

And one ore for the records:

The killer of the unlucky winner of the lottery Abraham Shakespeare (his girl friend!) had her Neptune inconjunct his Sun and Sun trine Neptune in her natal chart. See ‘Astrology, study of charts’/’Astrology and winning the lottery’.

Sun inconjunct Neptune is reflecting the ‘fallen angle’. Examples: Sarah Boyle shortly after her turn to fame and Barack Obama in the middle of his first year as a President.